For 110 years, Harley produced only air-cooled motorcycles, but in 2014 they introduced their first liquid-cooled. Was it because of constant overheating?

Is there anything worse than feeling the heat pouring out from under your right calf and the smell of burnt oil emanating from an overheating engine? Harley-Davidson is built on one thing: tradition. This keeps the brand pure, but the air-cooled engine has some limitations many would like to see improved. Liquid-cooled engines produce more torque and horsepower and run smoother for longer. They are not only more efficient, but they produce less pollution which is required by law in many parts of the industrialized world.

Harley-Davidson has bucked trends for decades and that includes preferring air-cooled engines over liquid-cooled. But does that create the potential for overheating? It would make sense that without a liquid-cooled engine, most Harleys would have a tendency to overheat, but they don’t.

In 2014 with the introduction of the Twin-Cooled 103 and the Screamin’ Eagle Twin-Cooled 110 Twin Cams, Harley made an exception and liquid-cooled these engines with radiators in the fairing along with a well-hidden central water pump. The Harley-Davidson company began a new era. In response to customer feedback called Project Rushmore, Harley began experimenting with counteracting the reputation for hot and overheating engines. But they didn’t convert all of their new engines to liquid-cooling, and these new engines were precision cooling by only applying the coolant to the cylinder heads. The rest of the engine block continued to be cooled by air and oil. Most Harley engines today are still air-cooled.

So let’s dive deep to see if Harley-Davidson deserves the reputation of hot engines as they refuse to compromise their look for modern cooling systems. Checking the latest Harley spec sheets, websites, and forums as well as researching scientific data concerning engine temperatures, gives us a clear idea of what’s wrong and what’s right about the modern Harley engines coming out of Milwaukee.

The running operational temperature for a motorcycle is between 150F to 220F. Most Harleys are air-cooled, which means they depend on air circulating through front fins to cool down the engine. When at a stop light or in slow traffic, the air is not flowing through the engine, and the temperature will continue to rise until the engine overheats.

When the temperature gets above 80F, the engine will not have cool air flowing around the engine, and it may not have the capability of keeping it cool. Combine this with idling in traffic, and the engine can easily overheat.

Another way a Harley engine regulates temperature is through circulating oil, but when the oil filter is clogged or the oil pump fails, or if you’re just low on oil, overheating becomes likely.

What Does Harley Do To Combat Overheating?

New Harleys now have Electronic Idle Temperature Management Systems (EITMS) which help to reduce the heat emanating from the engine when idling in traffic. The EITMS has sensors that give feedback to the EMS when the engine begins to overheat and shuts down a cylinder. To engage the EITMS, twist the throttle forward until the cruise control light flashes.

The Electronic Fuel Injection (EFI) distributes air and gas mixture differently when the engine is just starting up and when it is running hot. This overheating mode happens automatically at about 10 minutes after idling when the outside temperatures hit 80 degrees or higher. The cylinder heads heat up to about 750 degrees Fahrenheit, and the heat shields will be about 200F. The closed-loop mode has narrow band 02 sensors that regulate the AFR (Air/Fuel Ratio) to about 14.7 when warming up, but when idling in hot temperatures, the EFI will run in open-loop mode (also known as “Parade Mode”) at 12.0 AFR and drop the RPMs from its normal 1050 down to 950 RPMs.

What Can You Do To Prevent Overheating Your Harley Engine?

Keeping the oil clean, the air and oil filters clean, and the bike perfectly tuned will prevent many overheating problems. If you have a liquid-cooled engine, check the radiator and hoses for leaks. Most mechanics will find overheating issues before they begin.

A creative bike site, dkcustomproducts.com, has some ingenious and inexpensive ideas for relieving hot engine temps. One is to remove the thigh protector on the left side to allow air to flow from the right side under the heat protector and give the air a natural flow. They offer some other cheap fixes including a tank lift that opens up the engine and cools it down significantly as well as cooling deflector wings and relocating the coils.

In order to meet EPA guidelines, Harleys come from the factory with a lean air-gas ratio mix. When you re-tune or “flash” your Harley’s EFI to a cooler ratio, you will not only cool the engine, but it will run more powerfully and efficiently. Again, dkcustomproducts.com has a list of available engine tuners.

Factory mufflers and exhaust systems can be restrictive causing the air to back up and fight against the engine. This causes the engine to run hotter. Some will suggest getting rid of the catalytic converter, but there are safer ways to both prevent air pollution and create a free flow of exhaust to cool your engine. Do your research to find a slip-on exhaust muffler that meets your sound expectations and creates more airflow to prevent overheating.

If your Harley doesn’t already come equipped with an oil-cooling system, you can have an oil cooler installed and enjoy a 25-30% decrease in temperature. Even if you already have one, you can replace the factory installed with a fan-assisted oil cooler for $360.00 which if low-mounted will be fairly discreet or you can add a second one with a Dual-Cool Oil Cooler for about $325.00.

Modern engine fans that force air between the heads will dramatically cool down your engine much more effectively than the old-school side-mounted fans. Many Harley-Davidson diehards rave about the JIMs Force Flow Engine Fan Kit and the Ward Engine Fan Kit.

Perhaps one of the most obvious solutions to an overheating Harley is just to require the company to switch over their massive big-bore engines to a liquid-cooled system. It’s proven that such systems get more horsepower, more torque, are more efficient, and are better for the environment. As previously mentioned, after listening to customer feedback, Harley did manufacture a few models with a limited liquid-cooling system. But why not all? If Harley has a reputation for hot engines, it would make sense. Except it doesn’t.

When a customer buys a Harley-Davidson, they are not looking for the most efficient, practical, explosive, high-rev, high-horse-powered machine. The look and feel must not betray its brand. Harley is the best motorcycle in the world for resale value because it knows who it is. It is a combination of vintage, legend, style, and mystique. Even the engine could be more efficient without the V-twin, but it would lose its magical, uneven idle sound. We are talking about a brand that understands its base and that includes an air-cooled, don’t-care-about-the-heat look of chrome and muscle that shouldn’t be comprised for the sake of efficiency and even comfort.

Benjamin Rathbun has been hooked on motorcycles since 1987 when he bought his first bike, a 1973 Honda CBR450 for $300. Since then he has been through countless bikes and continued his two-wheeled hobby passing it down to his 21-year-old son who rides with him on the weekends in the Blue Ridge Mountains. Benjamin believes that nothing clears the mind faster than flying 26 inches above the asphalt on his Harley-Davison.

How To Plug & Patch a Motorcycle Tire

Why Are Harleys So Loud?

How Much Do Motorcycle Tires Cost? 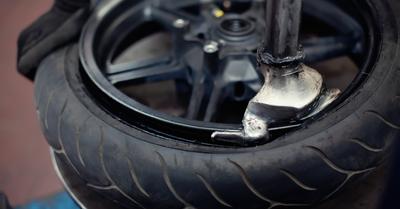 How To Break The Bead on a Motorcycle Tire