‍Looking for an entry-level, low-budget Harley Davidson and want to know its top speed? The XG Street 500 is your bike and it’s very fast.

The top speed of the Harley-Davidson Street 500 is 86 MPH. This is Harley Davidson’s least expensive and lightest bike, but the weight-to-power is excellent with a 494cc V-Twin Revolution engine that powers it to an impressive 29.5 ft-lbs of torque at 3500 RPM.

When the Harley Davidson Street 500 in vivid black was introduced in 2014, it was the first new bike in 13 years for the storied motorcycle manufacturer. The smallest bore engine they previously had was the Sportster Iron 883 with 883 cubic centimeters.

Appealing to younger, novice riders, a growing female rider population, and an international market that values smaller engines were enough to invest in this Harley Davidson experiment.

The president and CEO of Harley Davidson, Matthew S. Levatich, said the Harley Davidson Street 500 and 750 “fill a need for people who want to identify with a brand but have a motorcycle that is less intimidating, and more inviting. This bike is easier to ride and easier to learn how to ride.”

Unfortunately, when the Harley Davidson Motor Company began downsizing their plants in the North American Market, the cost to continue the Harley Davidson Street series proved too much especially considering the pushback from Harley purists and the lukewarm sales from underwhelmed customers.

The Harley Davidson Street 500 and 750 ran from 2014 – 2020 and used bike sales make this a very inexpensive investment into the Harley Davidson family at around $3000 especially when you consider the gas mileage of around 64 MPG.

The Power of the Harley Davidson Street 500

Harley Davidson’s Street 500 is completely blacked out including black cast aluminum wheels and exhaust. It is liquid cooled, a 494cc (30 cubic inches) Revolution V-Twin engine, and weighs in at only 455 lbs. Dry. The max torque of this 6-speed, belt-driven bike is 29.5 ft-lbs at 3500 RPMs with a compression ratio of 11:01 and the horsepower a modest 38.5.

The black fork gators on the front wheel are attractive and with a front fork lock and locking gas cap, it’s also safer from theft. It has a blade key ignition, and the brakes are ABS optional with a single cylinder and dual piston calipers in the front and rear wheel.

Other details include a 32-degree rake, trail angles optimized at 4.5 inches, a ground clearance of 5.7 inches, and a seat height of just under 26 inches laden for a low center of gravity. Taller riders may find the seating position a bit cramped and the riding position more upright than the traditional cruisers that have the rider stretch the legs forward past the fuel tank.

Some minor details may be noticed by Harley Davidson loyalists that are meant to save money like cheaper shield pieces, less quality welding, a small low fuel warning and low oil pressure light, not hiding the wiring better, and the mini bullet turn signals being on just one side instead of the traditional two. For a city bike, the mirrors are needed but are almost useless as they aren’t able to stretch around to see behind the larger riders.

The aesthetic of this vivid black road bike is one of its strongest points with a cruiser styling and a dark custom theme premium paint job in vivid black covering every part of the bike including the steel teardrop tank making this dark horse motorcycle incredibly cool and pure Harley Davidson.

The vivid black paint covers almost every inch of this nice looking bike except the locking gas cap which sticks outa little too much in chrome.

The Feel of the Harley Davidson Street 500

You will always feel like you’re going faster on a smaller bike with a narrow frame. Because the Harley Davidson Street 500 is the lightest of all Harley Davison’s motorcycles at 470 lbs including gas and a length of only 87.6 inches, when you get to that last gear on the six speed transmission, you will feel like you’re literally flying.

The little café inspired speed screen offers little protection against the wind which heightens the sense of speed and adds to the thrill. Even an experienced rider will be surprised at how fast it feels they are going.

Because of the liquid cooled engine, you won’t find it unbearable hot while in stand-still traffic. You don’t have to worry about it overheating, and while the tailpipe needs to be avoided especially by your back-seat passenger, it is generally a cool ride.

Most important for the Harley Davidson Street 500 owner is the smoothness of the ride. While many compromises have been made that Harley purists may reject, the handling and smooth ride are good compensation.

You may not hear the same engine sound or find the same quality parts, especially on the exterior, but having the power, low center of gravity stability, lightweight balance, a strong ergonomic brake, and excellent torque make it worth the price. Especially since that price is so low.

Upgrades to the Harley Davidson Street 500 To Increase Speed

Several upgrades will make your Harley Davidson Street 500 more comfortable, more stylish, and faster. One upgrade to make your bike more comfortable is moving the mid mount foot controls forward toward the front wheel so that you don’t feel like your riding position is completely upright on this budget bike and feel cramped if you’re taller.

A set of upgraded Forward Controls will shift your seating position so that you can sit into your bike like a typical Harley Davidson cruiser. The more aerodynamic shape of the bike may increase your speed slightly. Most sets will move you forward about 280mm and cost only around $130.00.

A stylish upgrade for the Harley Davidson Street 500 is to remove the rear fender plastic pieces and replace them with a wrap-around LED lighting system that will include a license plate light, turn signals, and an LED tail light in a beautifully unified piece. The airflow should be better decreasing wind drag and improving your speed slightly, and it will only cost about $50.00.

Naturally, you will want to upgrade the exhaust system, as most every Harley owner does. For speed, style, and sound you can get a full Exhaust System Comp-S 2-into-1 Black Exhaust that includes an end cap made of carbon fiber. It uses the stock head pipe for a perfect fit and easy installation.

Another way to increase speed is to upgrade your air cleaner. Engines need to breathe just like a human, and the better the oxygen intake the more efficiently the engine runs. Combining that with a new exhaust system will make your Harley Davidson  500 into a top level machine for its size. This will also make a stylistic improvement and cost between $75.00 and $90.00.

Other improvements and upgrades could include a new seat, new saddle bags, a new luggage rack to hold riding gear, splash some color on the dark custom vivid black paint, and a new suspension system, with rear shocks but these won’t improve your speed.

Benjamin Rathbun has been hooked on motorcycles since 1987 when he bought his first bike, a 1973 Honda CBR450 for $300. Since then he has been through countless bikes and continued his two-wheeled hobby passing it down to his 21-year-old son who rides with him on the weekends in the Blue Ridge Mountains. Benjamin believes that nothing clears the mind faster than flying 26 inches above the asphalt on his Harley-Davison.

Where To Buy Motorcycle Helmets

How To Determine Head Shape For Motorcycle Helmet 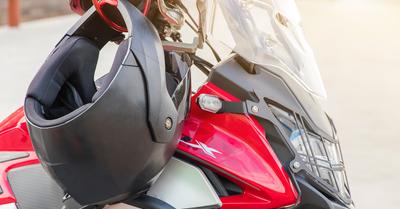 How To Lock Helmet To Motorcycle